The Dervish Retreat Center is a 60-acre facility, founded by Sheikha Khadija Radin in 1999. It offers events and studies in Sufi and other cultural and mystical traditions. There are classes that offer Mevlevi whirling, as well as other forms of whirling, zikr breath, hand drumming, meditation, Eastern, and Middle Eastern philosophies. It also offers personal retreats in early spring.

Participants are encouraged to experience for themselves activities that facilitate concentration, awareness and total absorption into practices which promote a centered and present state. Each person works at his/her own level and pace. There is a warm, supportive, and relaxed atmosphere amongst the community members. All religious affiliations, races, and cultures are welcome and respected.

The center has an outreach program that offers performances, lecture/demonstrations and master classes.

Khadija Radin began turning in 1971 after she first saw whirling performed by the followers of Sufi Murshid Samuel Lewis in San Francisco, California. They had recently lost their beloved teacher. She was enraptured by the meditative movement which was to change her way of life. She was, at the time, a teacher and choreographer of modern dance. Formerly a member of the Lucas Hoving Dance Company in New York. Shortly thereafter she resigned from an administrative and teaching position with the San Francisco Art Commission to travel from Holland overland to India and back, searching out the mystics, especially the Dervish.

She has been teaching turning since 1978. Khadija had been whirling for eight years when she met Postneshin Jelaluddin Loras, and began the study of the classical Mevlevi turn. She has followed the way of Mevlana ever since. She was given permission to teach Mevlevi turning in 1982 by Postneshin Loras. She is on the cover and featured in the recently published book Women Called to the Path of Rumi, The Way of the Whirling Dervish by Shakina Reinhertz.

Khadija Radin is also a Sheikha of the Sufi Ruhaniat International, a Sufi order founded by Murshid Samuel Lewis. She resides at The Dervish Center in upstate New York, teaching Sufi studies, the Mevlevi and other styles of turning and meditation. She is the director of the Body Mind Restoration Retreats, a cleansing and renewal program hosted at the center in the summer.

Khadija began formal training in meditation in 1969 with Swami Rudrananda and later with Swami Muktananda.

In January of 1982 she began training with Zen Master Joshu Sasaki Roshi. She was ordained a nun by Sasaki Roshi in 1991. She leads an annual whirling and meditation retreat for women. She travels the world performing and teaching Sufi tradition and whirling.

She teaches that one can experience meditation, drumming, whirling and every other activity as a doorway to being present, to experience that which sees through the eyes and hears through the ears. One can find the opportunity, in every activity, to identify with that which has no residence. Prior to the notion of one's self is the awakening to One Self. There is a dance in stillness and a stillness in dance, both of which are complete absorption, and thus, the dissolution of a doer. 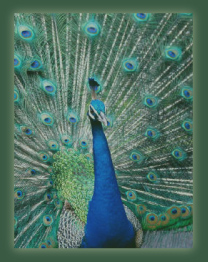 Dervish Center peacock
Do you know what whirling is? It is escaping one's existence continuously tasting the everlasting existence, in the absolute non-existence. 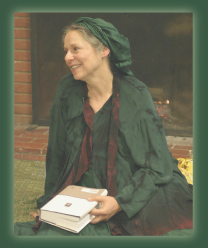 Sheikha Khadija
Photo: Lee Guthrie
The Dervish is in this world - but not of it
knowing intimately that every impulse of energy on the nerves of the five senses and the mind is not other than Allah's Presence