History of Mevlana Jelaluddin Rumi and the Whirling Dervishes

The history of the whirling dervishes begins with Mevlana Jelaluddin Rumi who was born in Balkh, (now Afghanistan) between 1200 and 1207. When he was a young boy, his family left their home because of the religious and political climate, just before the invasion of Ghengis Khan. The family eventually settled in Konya, Turkey, where his father, Baha'uddin Valad, was a revered religious scholar and mystic. After his father's death Rumi took up his father's position as head of a medrasse (religious school).

At the age of 37 Jelaluddin met Shams Tabrisi. Upon meeting they found in each other a unique Friend of Truth (Haq Dost) who could share the depth of the other's spiritual realization. They would retire into seclusion for long periods of time to have sohbet, a spiritual dialogue in the state of intoxication in the love of God. Their spiritual love and the exclusion of all of Rumi's students and friends caused jealousy amongst them. Shams, feeling the animosity, left Konya and went to Damascus, only to be summoned back by Rumi. Finally Shams disappeared forever, some believing that Rumi's students killed him.

It was Shams who introduced Rumi to music, poetry and turning as a form of mystical absorption in the divine. When Shams disappeared, it opened the gates of Mevlana's heart and a pouring of verse would not cease until his death in 1275. His poetry is as alive and pertinent today as it was over 725 years ago. His six volume Mathnawi is considered a divinely inspired book. His four other books are also examples of moving, passionate and profoundly deep verse.

Poetry, music and dance, in the name of God, were the only things he could do to express this ocean of love Shams had opened in him. His intimacy with the Beloved evoked joy and gratitude in his followers as they gathered for music, sacred chanting and the famous whirling dance.

Years after his death, his son, Sultan Valad, founded the Mevlevi Order, sometimes known as the Whirling Dervishes. The Sema dance, the sacred Sufi practice of whirling or meditative turning, has been passed down for over seven hundred years, as have the music, zikr (sacred chanting), poetry, and the etiquette of this tradition.

Women and men alike were in the Order and whirled together for three hundred years after Rumi's death. Finally, after more than four hundred years, men and women are again participating in the Sema together.

Postneshin Suleyman Hayati Dede was the Sheikh (elder or teacher) of Konya until his death in 1985. His son, Jelaluddin Loras, was born in the derga or spiritual center, literally on the other side of the wall of Rumi's tomb. Raised in this house next to Rumi's tomb, Jelaluddin was prepared since he was a young boy to exemplify, embody, and one day to carry the message and method of Rumi to America. In 1979 Dede sent his son to be the spiritual head and founder of the Mevlevi Order of America. Jelaluddin's mission was to fulfill his father's dream, to allow those who wish to once again freely practice the way of Rumi.

Postneshin Jelaluddin Loras (affectionately called Efendi) officially founded the Mevlevi Order of America in 1980 to serve followers in both the United States and Canada. Since that time he has traveled extensively, working with students of all paths and places. Under his direction, Semazens (those trained in the meditative whirling dance) were given the unique permission to perform the ritual of Sema (whirling prayer) in Konya, Turkey in 1994 and 1997 at the tomb of Rumi, a sacred site to many pilgrims worldwide. He continues to follow the direction and the fulfillment of the vision of Postneshin Suleyman Dede and welcomes all to the wonder and mystery of the Mevlevi way.

Jelaluddin Loras maintains residence in both Hawaii and Konya, Turkey, traveling throughout the United States and Europe in service of the Sufi path of Love. In 1982 he gave permission to Khadija Radin to teach the Mevlevi turn. Now, more than twenty years later, Jelaluddin and Khadija work together to bring the Mevlevi way to New York.

Jelal'uddin Rumi
Remember, the deep root of your being,
is the presence of the only Being
Give your life to the One who already owns your breath and your movements. 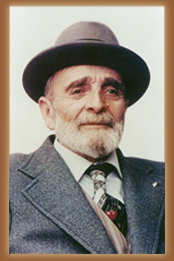 Postneshin Jelaluddin Loras at the center in June, 2005